To the surprise of no one Madison Bumgarner had another great game today, in both pitching and snotrocketing. We are not worthy.

Here are Madison Bumgarner’s snotrocket totals and other vital statistics for Sunday, June 30, 2013 on the road vs. the Colorado Rockies: 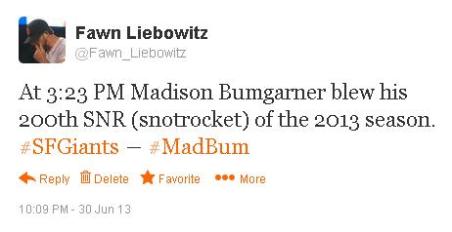 Also, today on Twitter Comcast Sports Net Bay Area Giants beat writer Andrew Baggarly tweeted that Madison Bumgarner might be a possibility for the 2013 MLB All Star Game. Or as he said it might come down to a choice between Bumgarner and Giants reliever Sergio Romo. Now, Romo’s done a very good job as the Giants closer this season but for me there was really only one true choice:

Madison Bumgarner’s next start should be this Friday, July 5 at home vs. the Los Angeles Dodgers (euww). See you here or on Twitter for all the exciting snotrocket action.

(Note: because of today’s [07/04/13] rainout of the Giants vs. Reds game in Cincinnati the starting rotation got pushed back and Bumgarner will now start on Saturday July 6  vs. the Dodgers [euww].)