Madison Bumgarner beat the Dodgers, blew lots of snotrockets and gave Yasiel Puig a dressing down for either flipping his bat or taking about 5 hours to round the bases after his home run. If it wasn’t for Brandon Belt’s broken thumb (HBP) it would have been a near-perfect night.

Here are Madison Bumgarner’s snotrocket totals and other vital statistics for Friday, May 9, 2014 on the road vs. the Los Angeles Dodgers:

In the bottom of the 6th inning Dodger outfielder Yasiel Puig hit a solo home run against Bumgarner. Maybe it was the bat flip or maybe it was that Puig took his own sweet time rounding the bases afterwards. Or maybe it was both. Whatever it was Bumgarner was none too pleased with Puig and let him know it as the controversial Dodger eventually neared home plate:

And now on to the best part of the game: the snotrockets. @SanDiegoGiants did us all a favor and captured some good ones tonight. In the 7th inning: 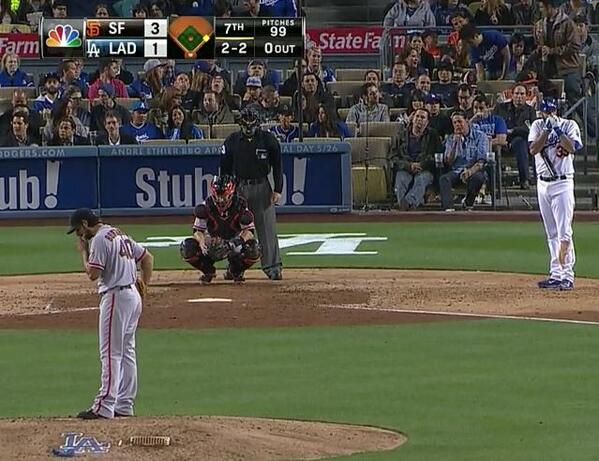 The 8th inning saw a snotrocket after a Dodger strikeout:

At the end of the 8th an especially fierce-looking snotrocket:

Madison Bumgarner’s next start should be Wednesday, May 14, 2014 at home vs. the Atlanta Braves. See you here or on Twitter for all the exciting snotrocket action.