Madison Bumgarner in the Big Apple, striking out batters, pitching scoreless innings and blowing snotrockets. The Mets: peeled and cored.

Here are Madison Bumgarner’s snotrocket totals and other vital statistics for Sunday, August 3, 2014 on the road vs. the New York Mets:

The snotrocket screencapper artiste known as @SanDiegoGiants produced some snotrocket portraits that I’m sure you will enjoy. Here’s one from the 6th inning:

And another from the same inning: 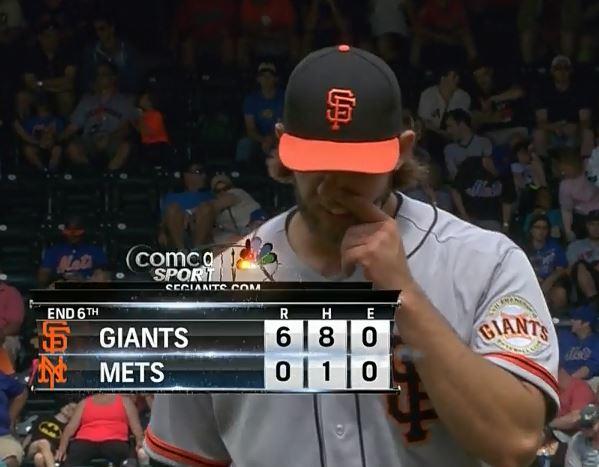 Batman Kid and Severed Head Lady were in the stands:

As was Handie Lady:

An on-base snotrocket from the 7th inning:

Madison Bumgarner’s next start should be Friday, August 8, 2014 on the road vs. the Kansas City Royals. See you here or on Twitter  (I live tweet the Bumgarner snotrockets) for all the exciting snotrocket action.