Finally. Finally the San Francisco Giants deigned to score some runs for their ace starter Madison Bumgarner and provide him with an easy victory. The Giants scored more runs (15) than Bumgarner blew snotrockets (11). A remarkable achievement.

Here are Madison Bumgarner’s snotrocket totals and other vital statistics for Friday, July 10, 2015 at home vs. the Philadelphia Phillies:

Last night on Twitter @SanDiegoGiants went the extra mile and got some fine Bumgarner snotrocket screencaps and then some. Here’s one from the 2nd inning: 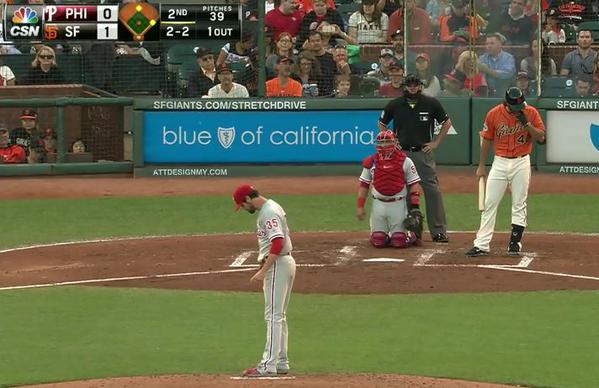 In the 4th inning Bumgarner trolled his fans with a snotrocketless nose rub:

Also in the 4th inning we witnessed Madison Bumgarner attempting to pass on his snotrocketing skills to 1st base coach Billy Hayes but Hayes had some trouble: 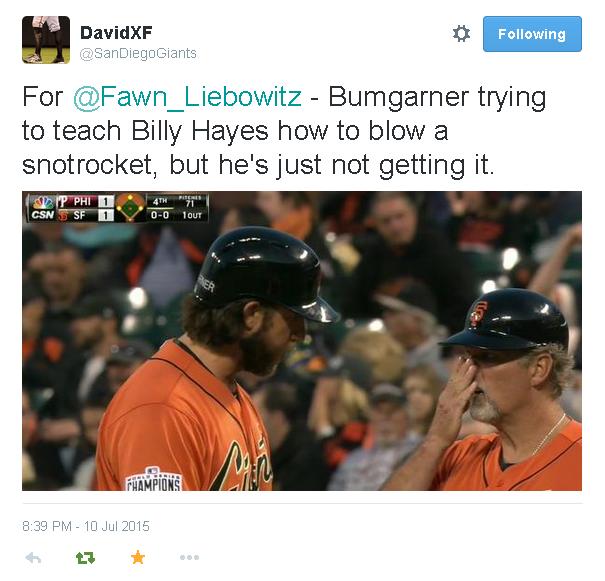 By the 5th inning Bumgarner had given up on snotrocket teaching and went back to snotrocket blowing:

A “hey they scored 10 runs in one of my starts” snotrocket:

Madison Bumgarner’s next start should be…???  The MLB All Star Game is Tuesday. Bumgarner is an All Star and could pitch in Tuesday’s game. If he does then in all likelihood his next start might be Sunday, July 19, 2015 at home vs. the Arizona Diamondbacks. If he doesn’t pitch in the All Star Game then Bumgarner’s next start might be Friday, July 17 against the DBacks. Or just for the hell of it he could start the Saturday, July 18 game against those same snakes. Who knows. Whenever he pitches next I’ll see you here or on Twitter for all the exciting snotrocket action.