Another  San Francisco Giants game at Coors Field in Denver, home of the Colorado Rockies and of nightmares. It seems like every game there something freakish happens. Nothing is normal at Coors Field. Every win is strange and every loss bizarre. Never ordinary, always weird. Or as one fan put it:

Madison Bumgarner on the mound today in Denver and it was a pretty standard outing for him. Bumgarner pitched well and produced snotrockets. We can’t ever ask for more. I mean, we got more (can you say two 3 run homers by Buster “MVP” Posey? I think you can) but as long as Bumgarner’s blowing snotrockets I’m happy.

Here are Madison Bumgarner’s snotrocket totals and other vital statistics for Saturday, May 28, 2016 on the road vs. the Colorado Rockies:

Snotrocket with a little extra something on it:

Bumgarner’s pitching and snotrocketing were on point:

A 5th inning snotrocket from the centerfield camera which as @SanDiegoGiants noted was a little far away:

The bottom of the 5th also saw another double snotrocket. First the left nostril: 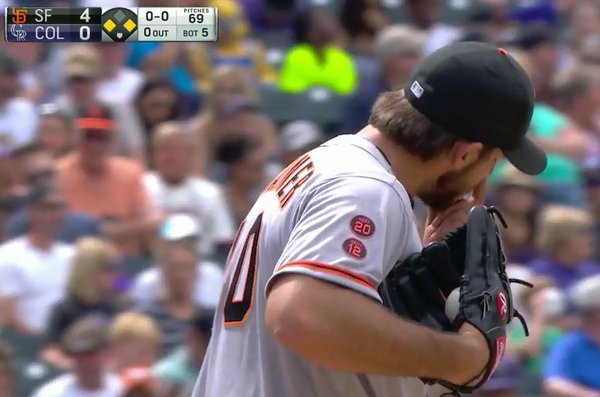 And then the right nostril:

Sometimes I worry about all the attention we pay to Bumgarner’s, er, action on the field:

Madison Bumgarner’s next start should be next Thursday, June 2, 2016 on the road vs. the Atlanta Braves. See you here or on Twitter for all the exciting snotrocket action.