That man did it again: 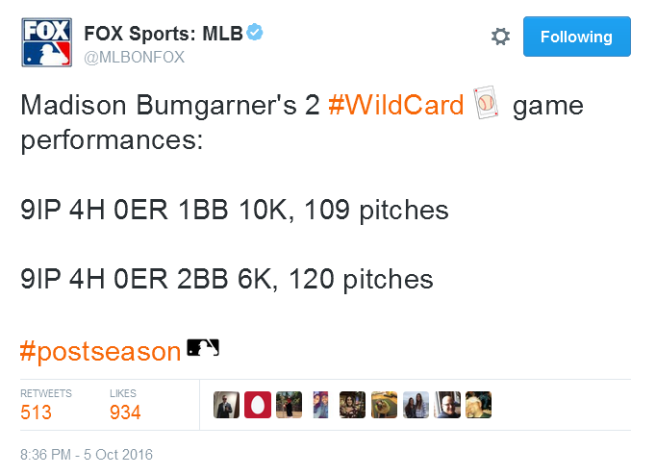 That man shines in the postseason:

That man is in some pretty good company: 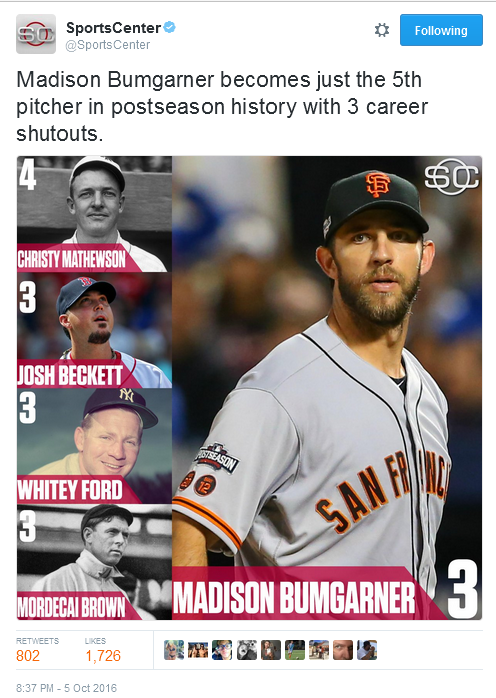 But that man also stands alone:

The San Francisco Giants faced the New York Mets tonight in the National League Wild Card game. As you can tell from all the tweets above Madison Bumgarner was his usual brilliant self in the post season and the Giants won 3-0 to advance to the NL Division Series, the 4th time in 7 years they’ve done so. Sometimes I forget to give my daily thanks for Bumgarner existing on this planet and pitching for the Giants and for this I should be made to suffer. Madison Bumgarner as a Giant deserves constant praise, worship, zero criticism and whenever he walks by people should be required by law to bow down or do this:

Here are Madison Bumgarner’s snotrocket totals and other vital statistics for Wednesday, October 6, 2016 on the road vs. the New York Mets:

MLB doesn’t give out an MVP award for the Wild Card game but if they did of course Mr. Bumgarner would be a shoo-in (sorry Conor Gillaspie) for the honor tonight. Twitter doesn’t give out an MVP award for best Bumgarner snotrocket screencapper but if they did @SanDiegoGiants would run away with the thing (runner-up @iamjerklord). Scoreless snotrocket in the bottom of the 4th inning:

Still scoreless but a runner on 2nd and 1 out snotrocket:

Bumgarner demonstrates his appreciation for his teammate’s 3 run homer: 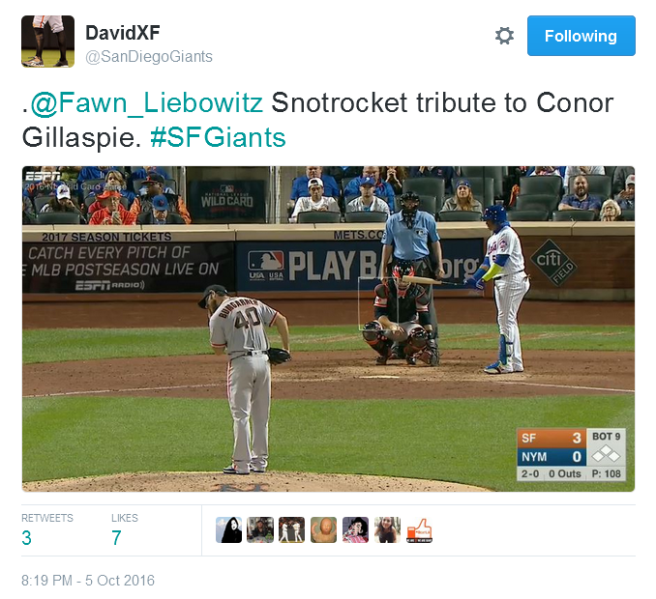 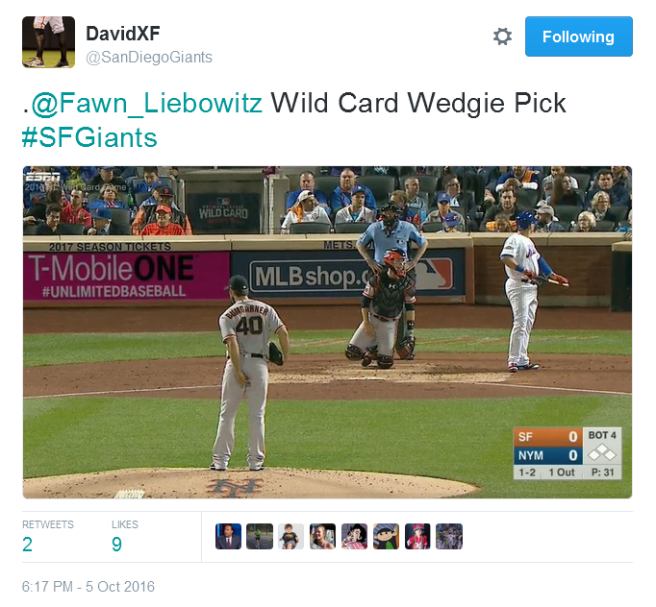 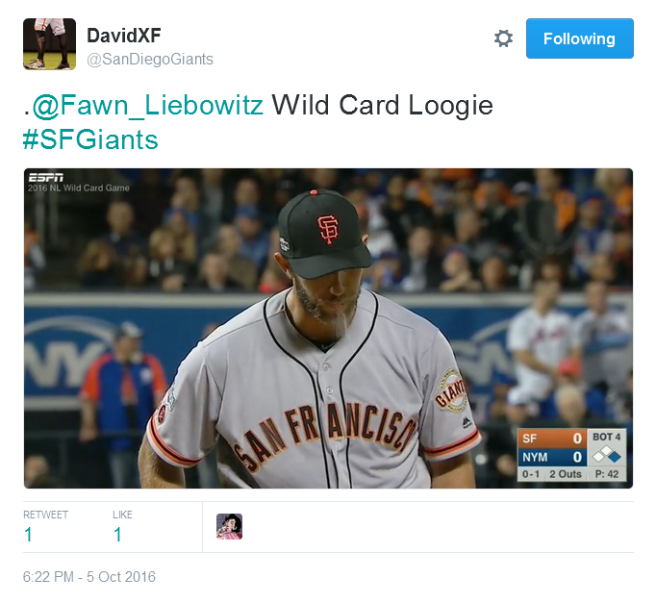 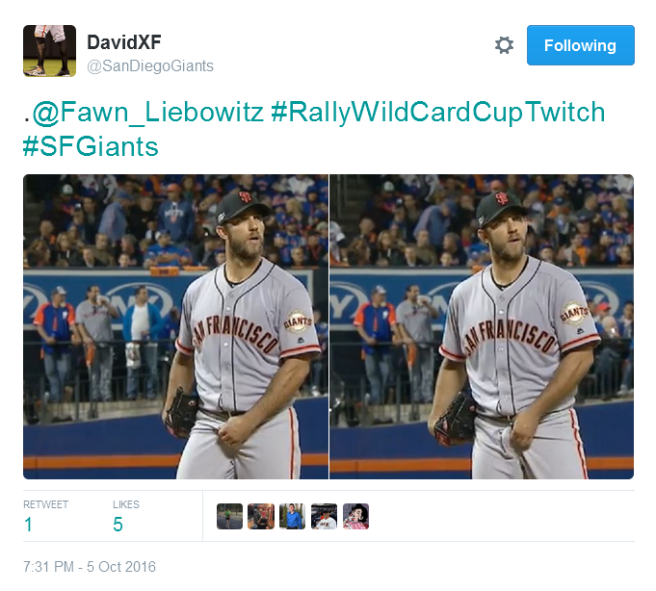 Exciting cup twitching closeups because you know you want them. Part one: 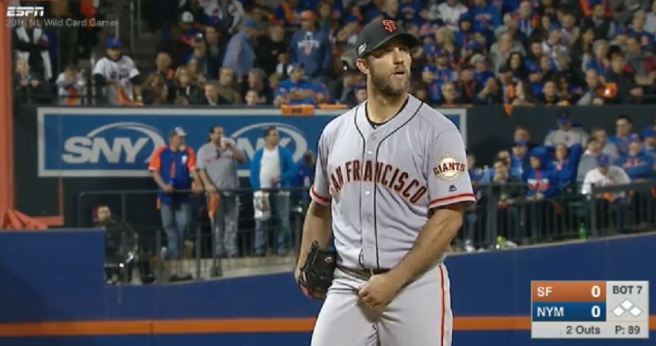 Before Gillaspie hit a 3 run homer in the top of the 9th it had been a scoreless duel between Madison Bumgarner and the Mets’ Noah Syndergaard, leaving some to wonder how long the game might go on. No worries about Bumgarner though: 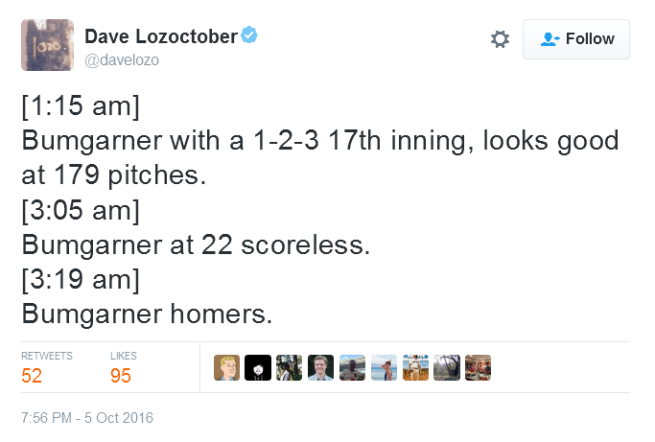 You know when there’s a Madison Bumgarner postseason victory a Buster Hug is sure to follow: 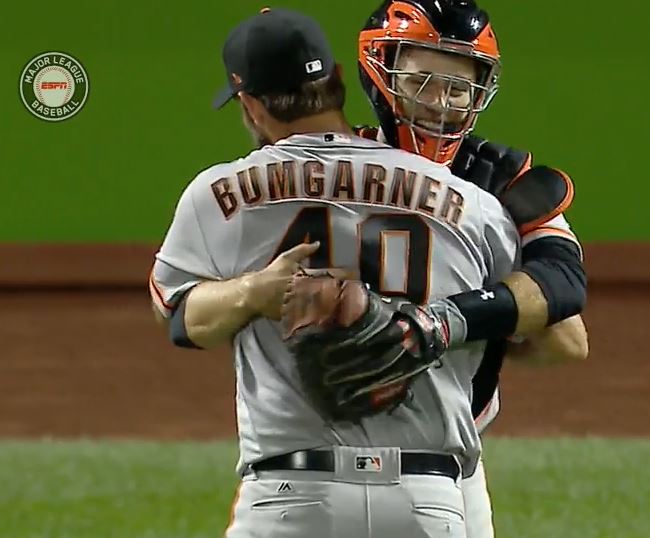 Too adorable for words: 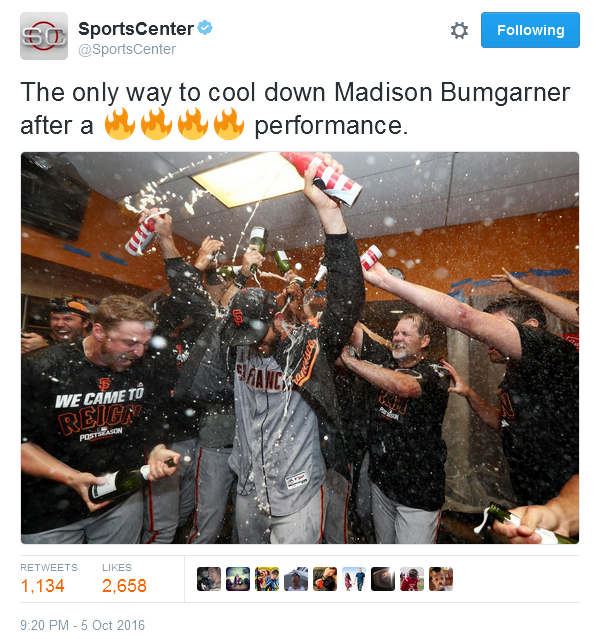 All smiles in the clubhouse after the Giants win:

After Bumgarner’s masterful win tonight there was speculation on Twitter about the Giants possible rotation for the upcoming NLDS:

Madison Bumgarner’s next start should be Monday, October 10, 2016 at home vs. the Chicago Cubs. See you here or on Twitter for all the exciting postseaon snotrocket action.