Madison Bumgarner’s third big league appearance came once again in relief, this time against the Arizona Diamondbacks. One thing about watching these old MLB games – you have to watch the broadcast of the home team airing the game; you don’t get to choose between opposing broadcasting teams. If the Giants are at home then there’s no problem. San Francisco has a very very good broadcasting team, both radio and television. But other teams are hit and miss, mostly miss. In 2009 the DBacks TV color guy was Mark Grace and I found him irritating to listen to. I don’t remember him contributing any relevant baseball info at all or anything even remotely interesting in this game. Plus he was very much a homer which I don’t like.

Also annoying and weird was that the DBacks TV broadcasters referred incessantly to a section in the outfield where some redhead DBacks fans were sitting, wearing t-shirts and holding signs proudly proclaiming their redheadedness. I guess it has something to do with red being part of the Diamondbacks team colors. Okay then.

But we’re not here to discuss Mark Grace or redheads. We’re here for Bumgarner and his glorious snotrockets. Here are Madison Bumgarner’s snotrocket totals and other vital statistics for Tuesday, September 22, 2009 on the road vs. the Arizona Diamondbacks:

Like I noted in a previous blog post the videos of these games from 2009 are not of the highest quality but I’m not complaining. Not at all, because I’m still so grateful that I have the opportunity to view them at all, 8 years after they happened. I just wanted to explain why my snotrocket screencaps aren’t of the highest quality like you’re used to from Bumgarner’s unofficial official snotrocket screencapper @SanDiegoGiants.

A really hard to see snotrocket from the bottom of the 4th inning: 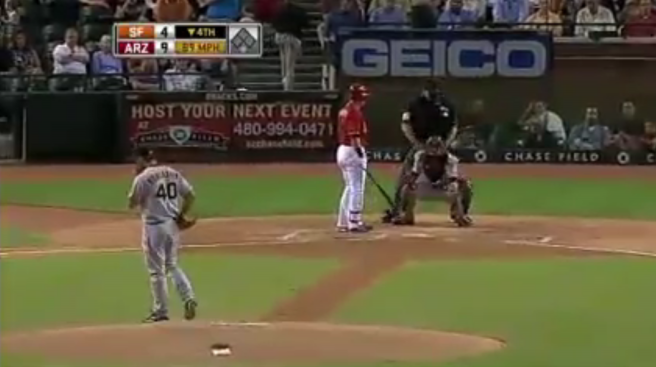 Besides the Bumgarner pitching and snotrocketing this game had little else going for it as the Giants lost 8-10. I did get an exciting screencap of Giants manager Bruce Bochy’s tight pants:

Also baseball legend Joe Garagiola was in attendance at the game:

Madison Bumgarner’s next and final 2009 appearance was on Saturday, October 3, 2009 on the road vs. the San Diego Padres. When I watch it and tally the snotrockets make sure to tune in here and on Twitter for all the exciting vintage snotrocket action.