2017 was a short season for Madison Bumgarner but we weren’t short on snotrockets. Okay, we had fewer snotrockets because we had fewer Bumgarner starts but you get what I mean. There were snotrockets. They were real. They existed. Briefly, and there weren’t a whole lot of them, but they were seen and many of them were captured by that ace snotrocket screencapping duo @SanDiegoGiants and @iamjerklord. Much thanks go to them because as I’ve mentioned before this blog would just be some snotrocket stats and not much else without their screencaps. The following are examples of their finely honed craft as seen on Twitter last season.

From Mr. Bumgarner’s historic game on Opening Day we have this shy snotrocket:

From the same game, with a note and commentary on Bumgarner’s superlative achievement that afternoon:

Even though the Giants would end up losing Bumgarner’s fabulous start we fans still had reason to be happy:

Madison Bumgarner’s second start was in San Diego and he gave the Padres what for and also some mucus in double shot form:

Half in and half out of the dugout snotrocket from the same game. Also take note of that awesome hits total and run support that Bumgarner’s teammates provided him that day (and for most of the season too):

Madison Bumgarner’s third start of the season was in Kansas City against the Royals, their first matchup since Bumgarner showed everyone back in 2014 that his name belonged on a list of the greatest World Series pitchers ever. Scoreless snotrocket from the 4th inning:

The July 25th game saw a snotrocket vs. the Pirates, followed by an exciting afterwipe: 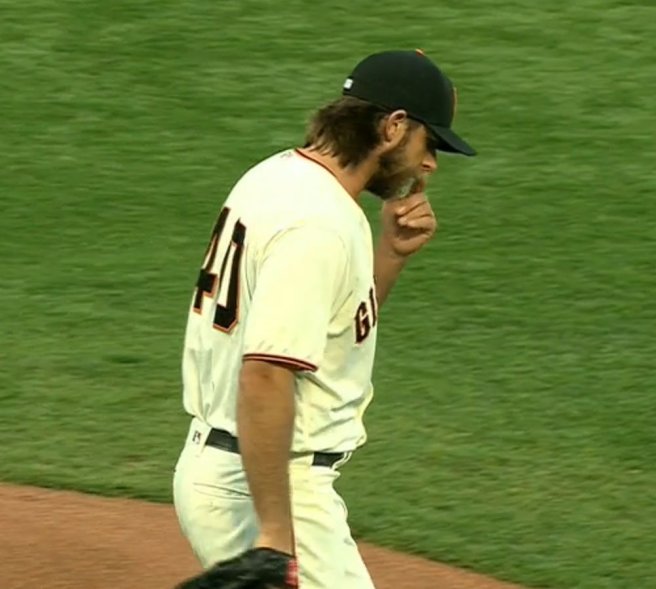 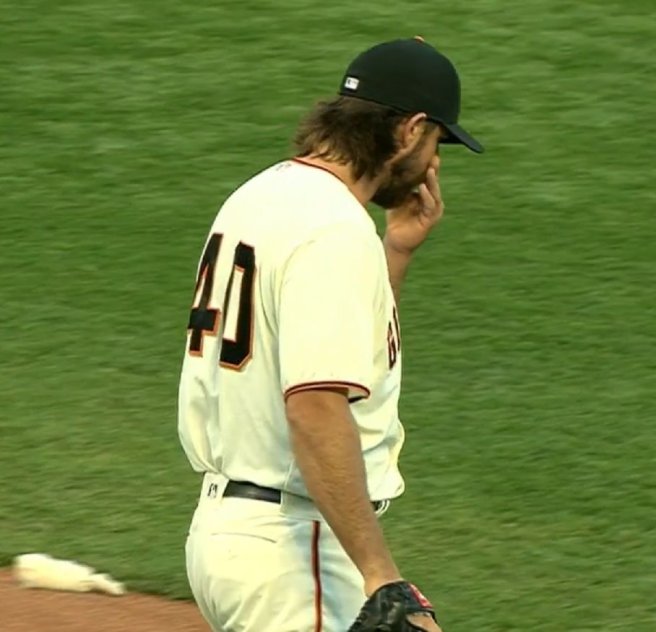 Also from the same game a thrilling at-bat snotrocket:

That day we saw the creation of an entirely new kind of dessert:

Everyone’s favorite, the double snotrocket, from a July 30th game against the Los Angeles Dodgers (ew). First to be expressed is the left nostril:

Followed by the right nostril: 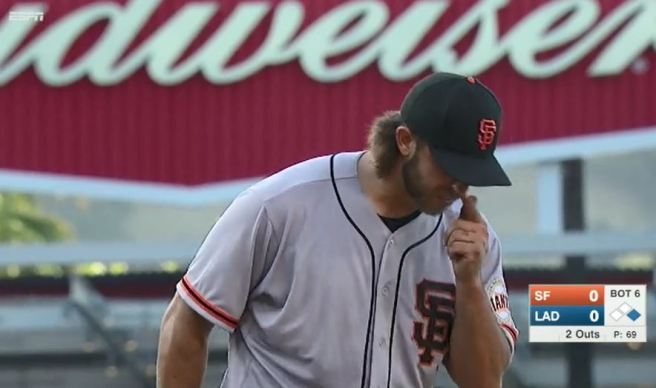 The last weekend in August saw the first Player’s Weekend in Major League Baseball. Players from all thirty MLB teams wore different colored uniforms all weekend and had the opportunity to choose a nickname to go on the back of their jerseys, instead of their last name. I don’t know who designed the Giants uniforms but let’s just say I’m glad they were only temporary. Orange sherbet snotrocket from the August 26th game vs. the Arizona Diamondbacks:

For the nickname on the back of his jersey Bumgarner played it safe: 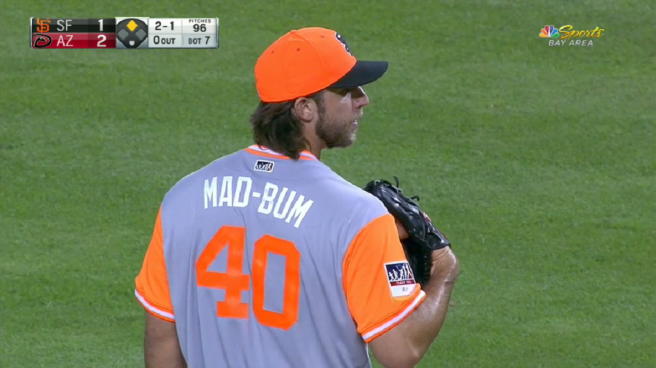 Just when you think you’ve seen every kind of snotrocket that Madison Bumgarner has blown he comes up with a new one. From the September 3 game vs. the St. Louis Cardinals behold – the (glove) pocket snotrocket:

We were all so excited to see the birth of a new kind of snotrocket that no one was quite sure what to call it: 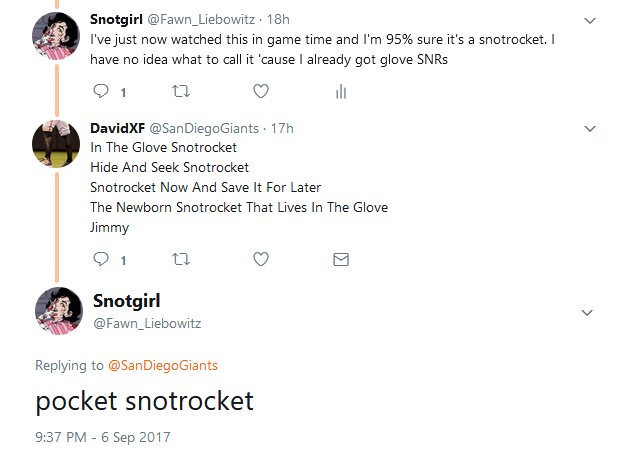 An at-home snotrocket from a September 16th game vs. the Arizona Diamondbacks:

Madison Bumgarner’s last start of the 2017 season was a victory for both the team and snotrocket fans everywhere. Here’s a double snotrocket on September 23rd vs. the Dodgers (ew). First the left nostril:

Followed by the right nostril:

Snotrocket gif from the same game:

That last gif caused some initial confusion but fortunately I had the proper volume to consult for a ruling: