As you might have guessed this 2010 start was a rough one for Madison Bumgarner. Pitching-wise, I mean. In snotrocket blowing Bumgarner was magnificent.

Here are Madison Bumgarner’s snotrocket totals and other vital statistics for Wednesday, August 25, 2010 at home vs. the Cincinnati Reds:

So there were lots of snotrockets but precious few snotrocket screencaps on account of 2010 fuzziness. If you’re okay with the fuzzy I still managed to screencap a few of them though. Here’s a snotrocket from the 1st inning: 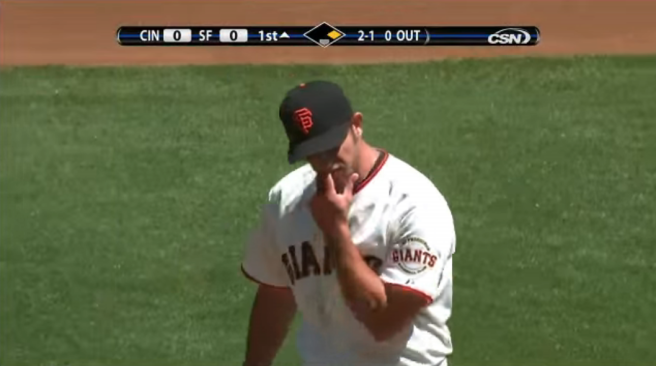 Madison Bumgarner’s next start after this one was also at home, a night game vs. the Rockies. I’ve got my fingers crossed that the 2010 snotrockets being at night will hopefully be fuzz-free unlike most of their daytime counterparts. I’ll probably live tweet them fuzzy or not so see you on Twitter or here for all the exciting vintage Bumgarner snotrocket action.