Rocky Snotrockets sounds like the name of a snot-blowing cartoon character. 10/10 would watch.

Hey guess what? The San Francisco Giants won! Madison Bumgarner won! The fans won because there were snotrockets!

Here are Madison Bumgarner’s snotrocket totals and other vital statistics for Saturday, September 15, 2018 at home vs. the Colorado Rockies: 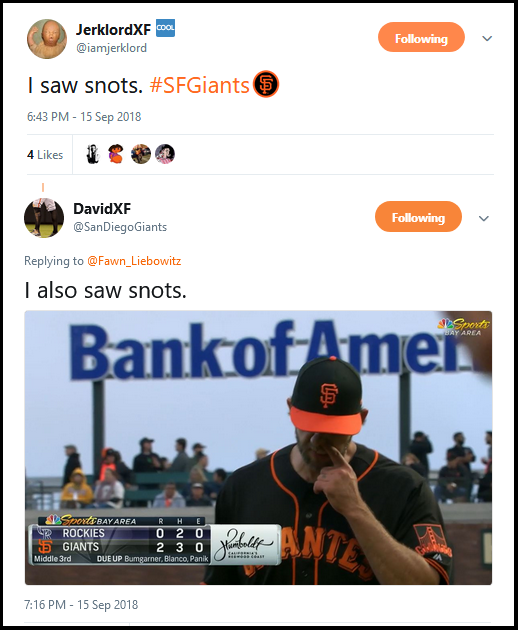 A solo snotrocket from the 5th inning:

Here’s a still of the same one, especially for you snotrocket connoisseurs: Double snotrocket from the 5th inning:

Here’s one that we don’t see too often – a mound visit snotrocket, complete with Austin Slater’s terrified reaction:

Mr. Bumgarner was done for the night after 6 strong innings. He looked like he could go the distance but was pulled early for some reason that we fans were not privy to at first. I was worried but tried to think positive: 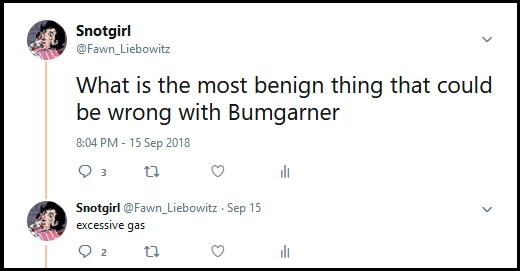 As it turns out Bumgarner felt a little side tightness during his last at-bat and was removed from the game for precautionary reasons so it was nothing too serious. Phew. 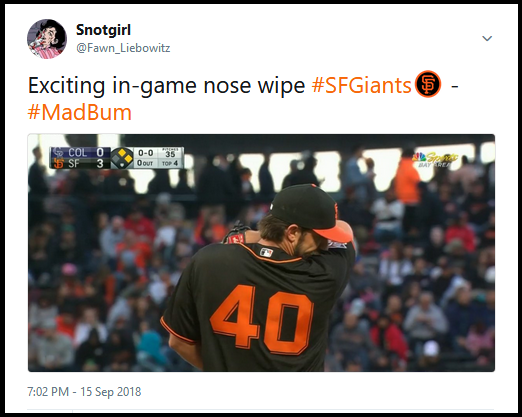 Madison Bumgarner’s next start should be this Friday, September 21, 2018 on the road vs. the St. Louis Cardinals. See you here or on Twitter for all the exciting Bumgarner snotrocket action.